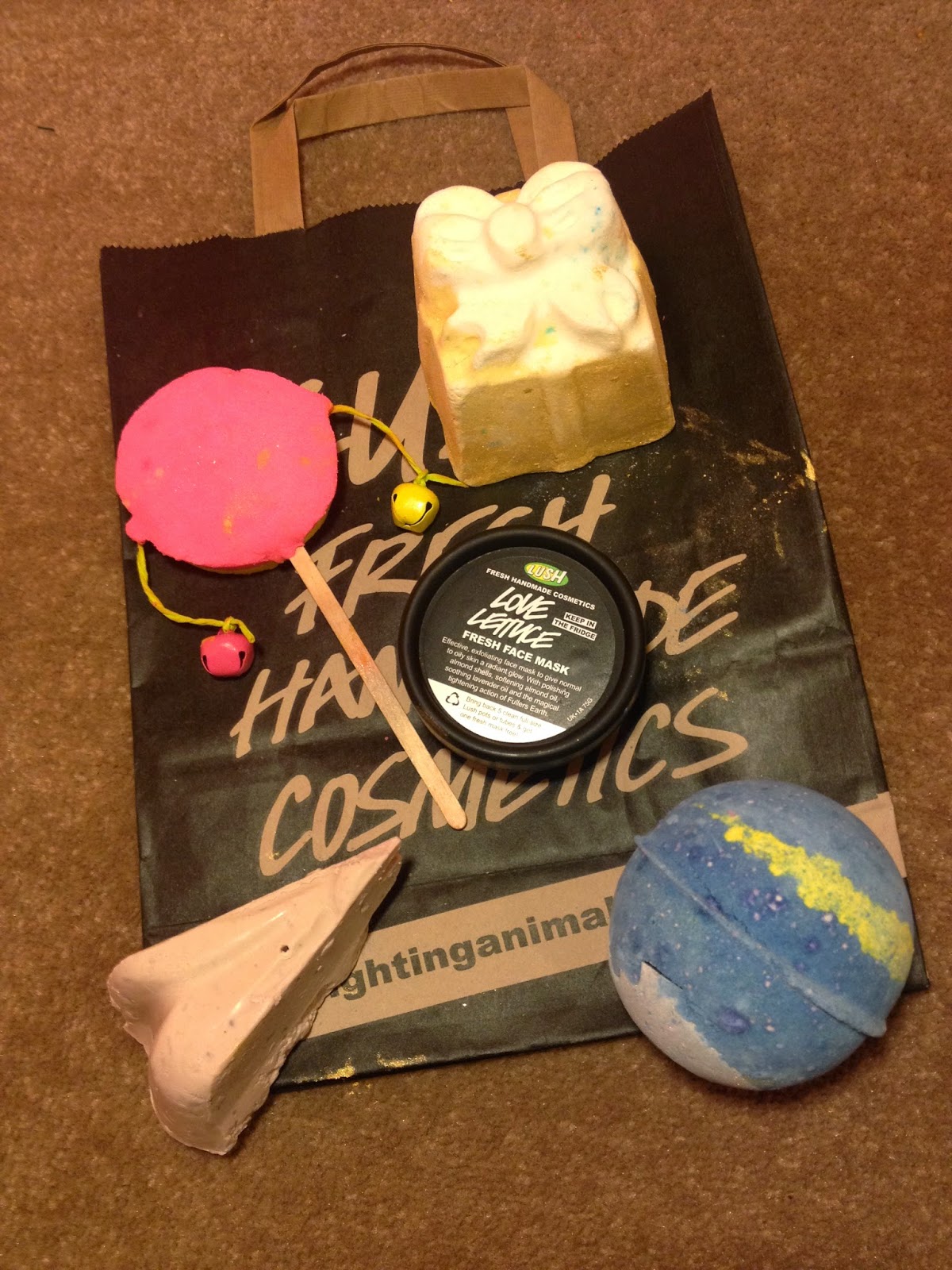 Okay, so I haven't been shopping (properly) in a good 2 months, mainly because I have no time, but also because I don't usually have the money, so when I decided to go to town with my friend the other day, I just had to visit Lush! However, for someone with very little money, I spent a bit more than anticipated! Anyway, I thought I'd just show you what I brought and I will probably do reviews on some of the product! 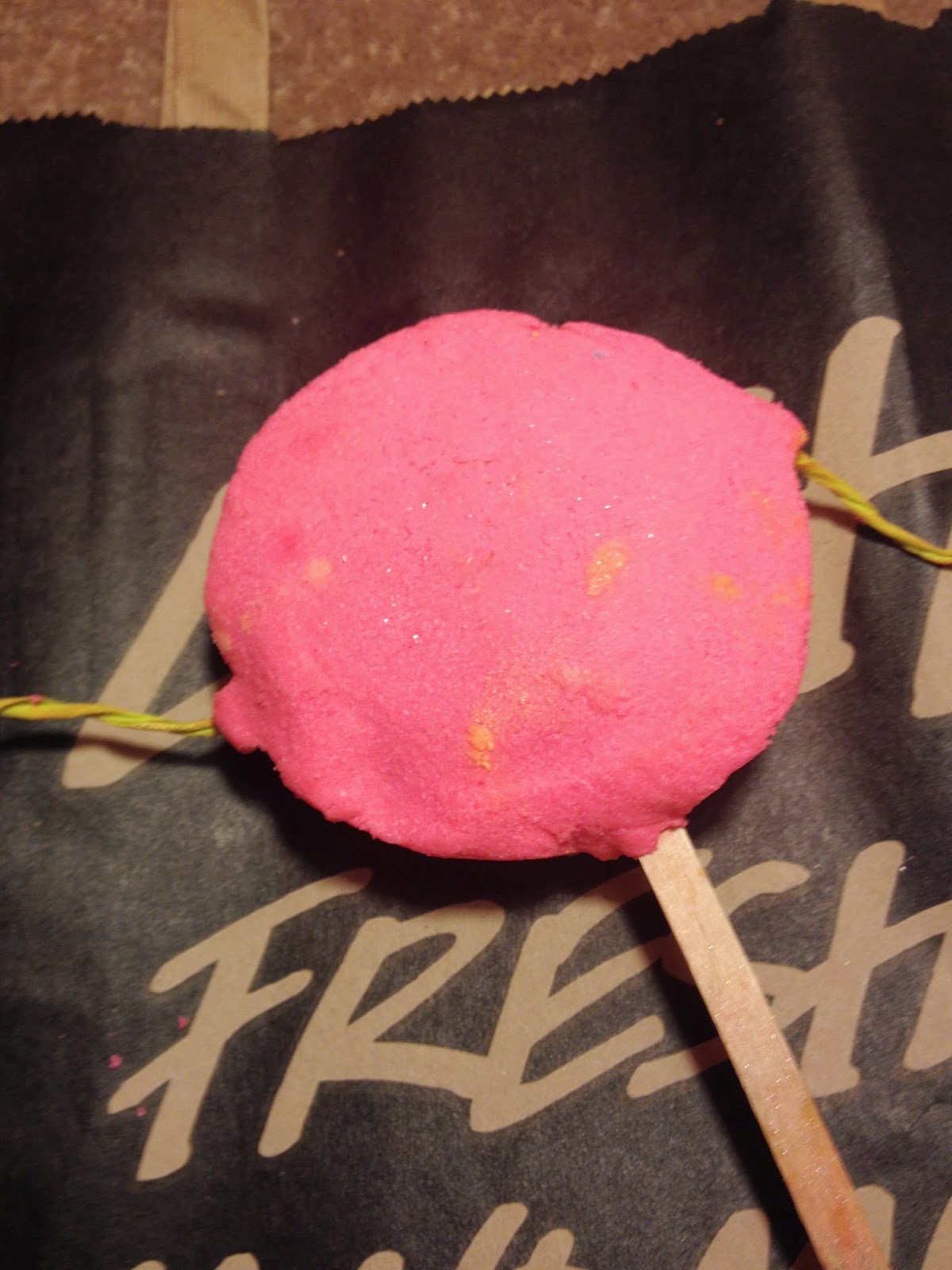 'Drummer's Drumming' Bubble bar-£5.25
Okay, so I will I admit that I primarily brought this because it looks cool! I mean, just look at it, it has bells on it and everything!! It is pink on one side and bright yellow on the other, and you just swish it into your bath water to create bubbles, either whilst the tap is still running or you can wait until the water is fully run. It smells quite faintly or strawberries and cream, and it make your bath smell delicious! I have actually already used this one in a bath I had the other day, and I would definitely advice it! The lovely lady in the shop said you can get around 5-6 uses out of it, so for just over £5, that isn't bad! 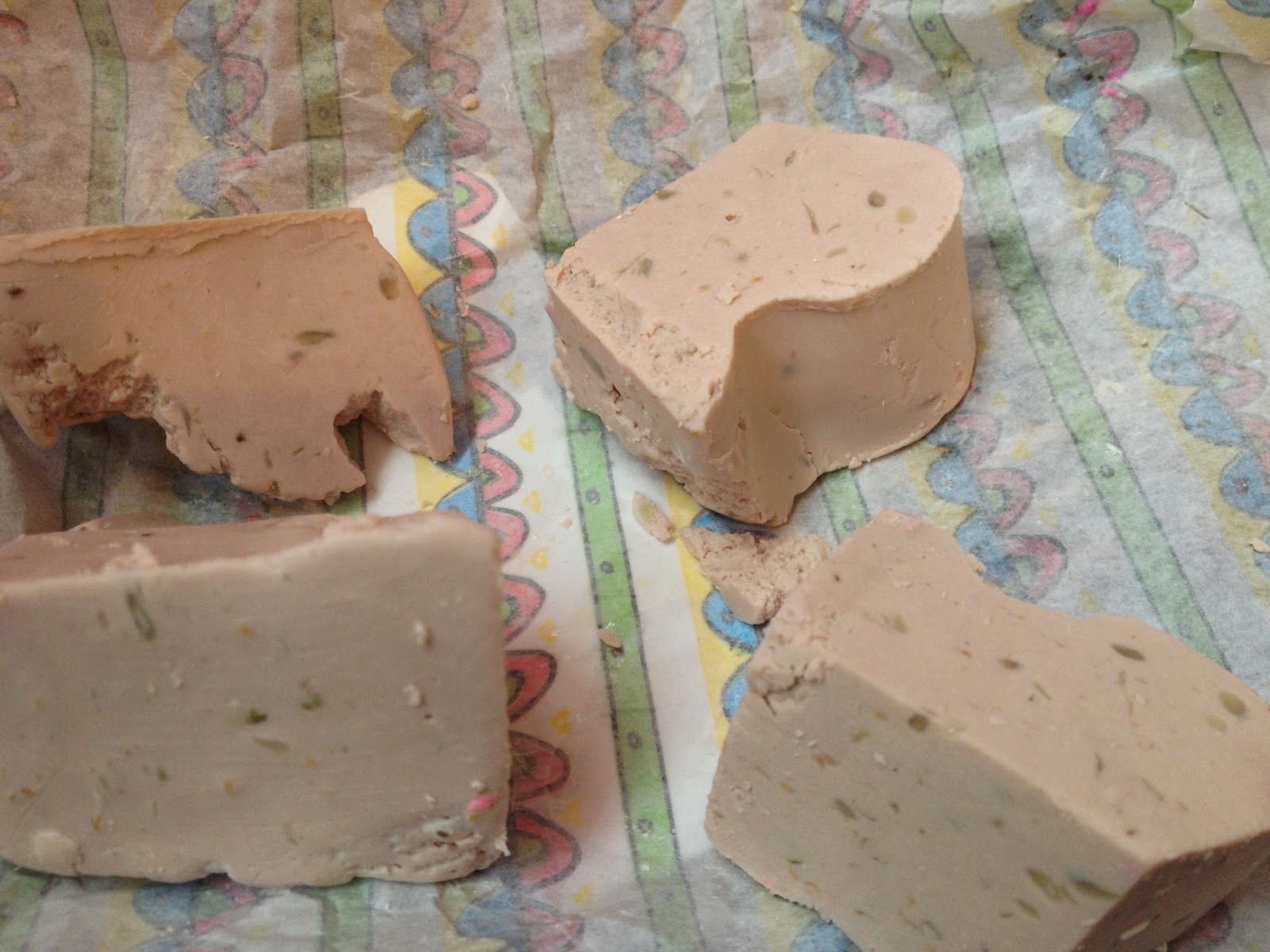 'Fresh Farmacy' Facial Soap- £4.95 for 100g
Next is this facial soap, which I had no intentions of finding and then buying! I was talking to one of the people who worked there when she asked what type of skin I have. When I described my oily and spot prone skin she advised this, which apparently reduces the redness of spots and acne scars, as well as making your face less oily. At this stage I thought 'why the hell not' because she basically described what my skin needed! 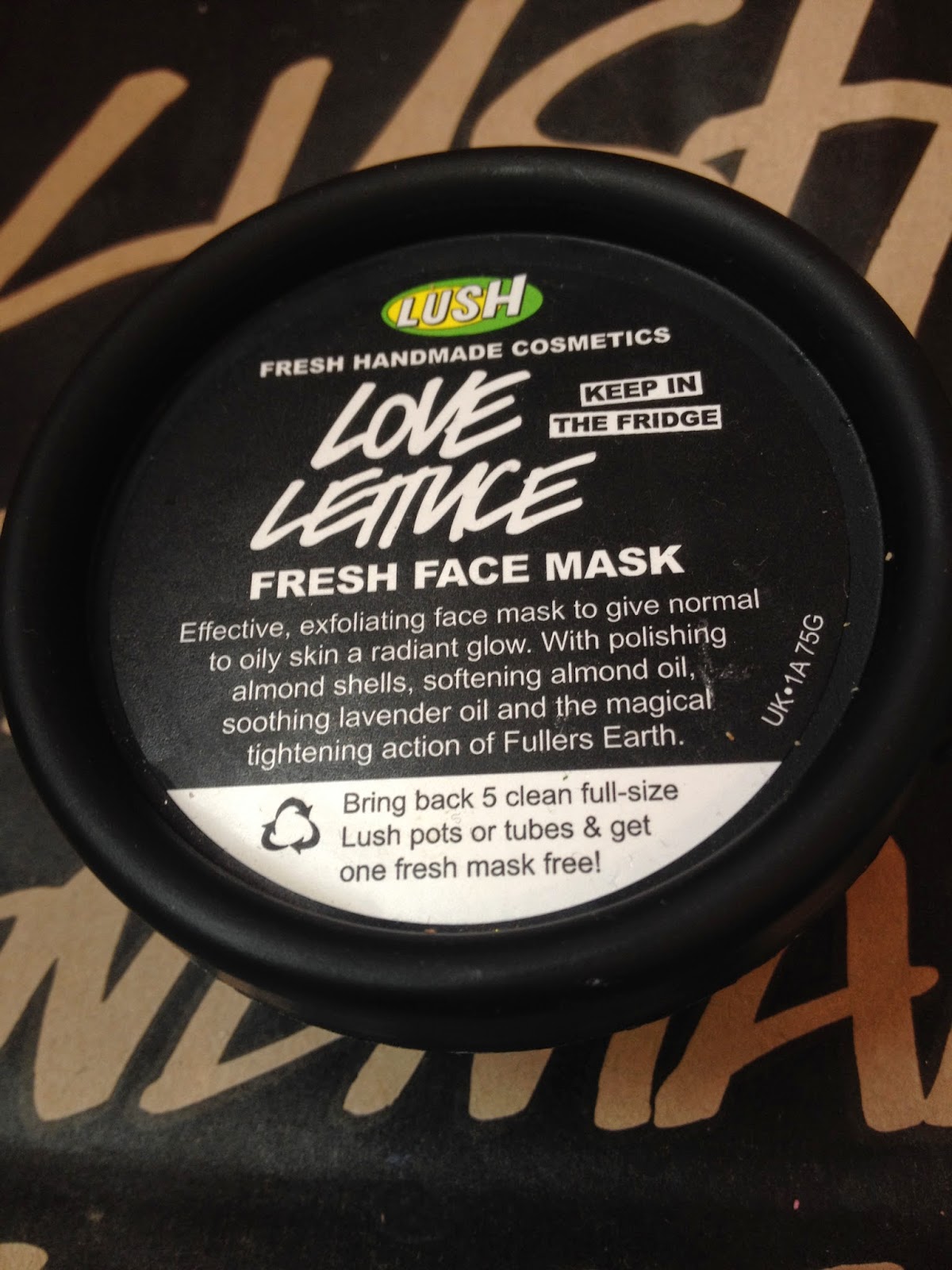 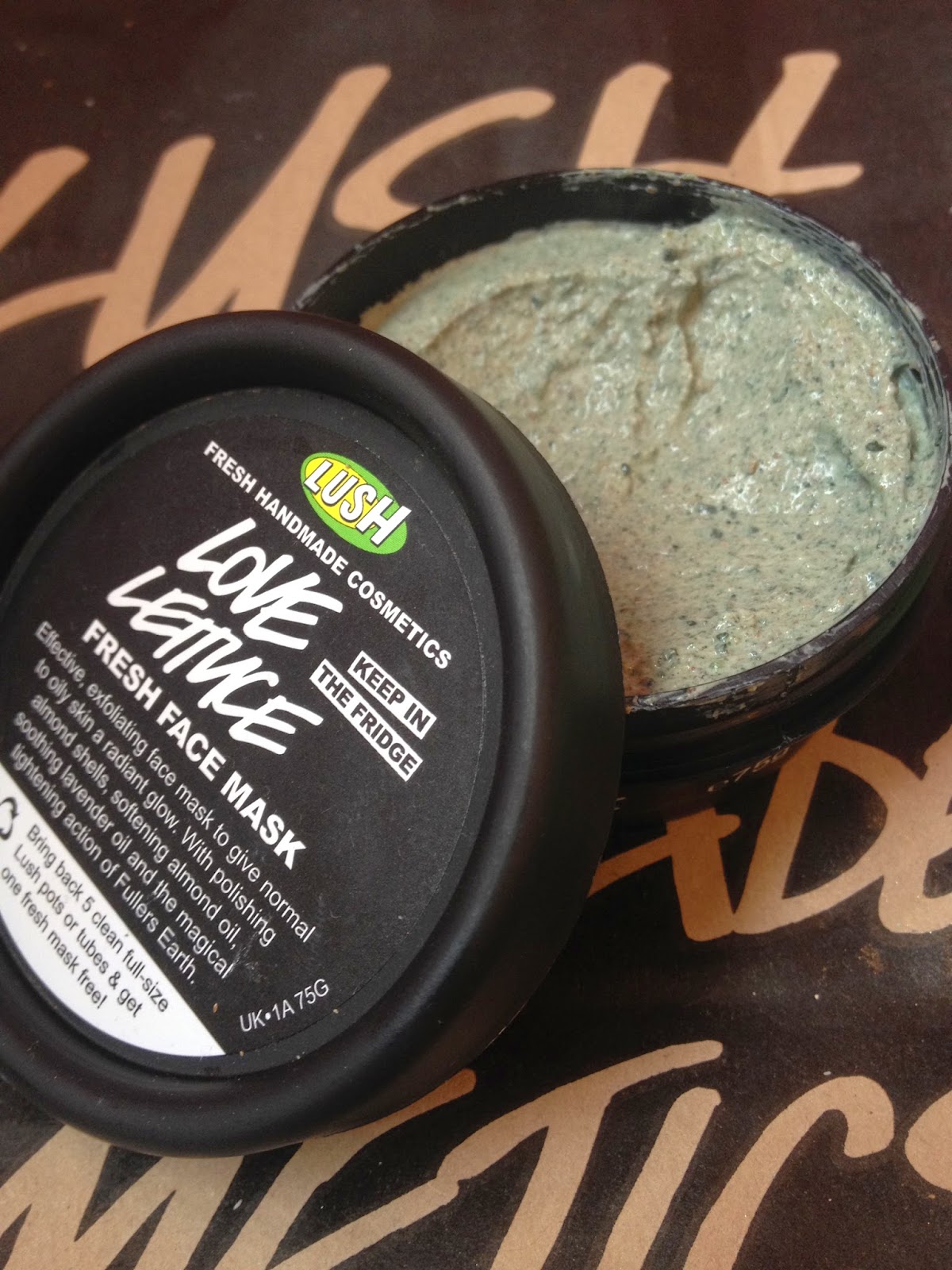 'Love Lettuce' face mask- £6.50
I have never tried a face mask from Lush before, but I wanted to go in and buy the 'Cupcake' face mask, as a blogger recommended it to me. However, the person who helped me said that the 'Love Lettuce' mask (weird name, I know) would be best for my skin and it works nicely with oily skin. It has a faint smell of lavender, and I have to be honest and say that I'm not the biggest fan of lavender, but because I have never ventured into Lush's face masks before, I felt like I had been thrown in at the deep end, therefore just buying what the lady advised!!
It has a nice consistency and after using it just once, I can say that it really did help reduce the levels of oil in my T zone. 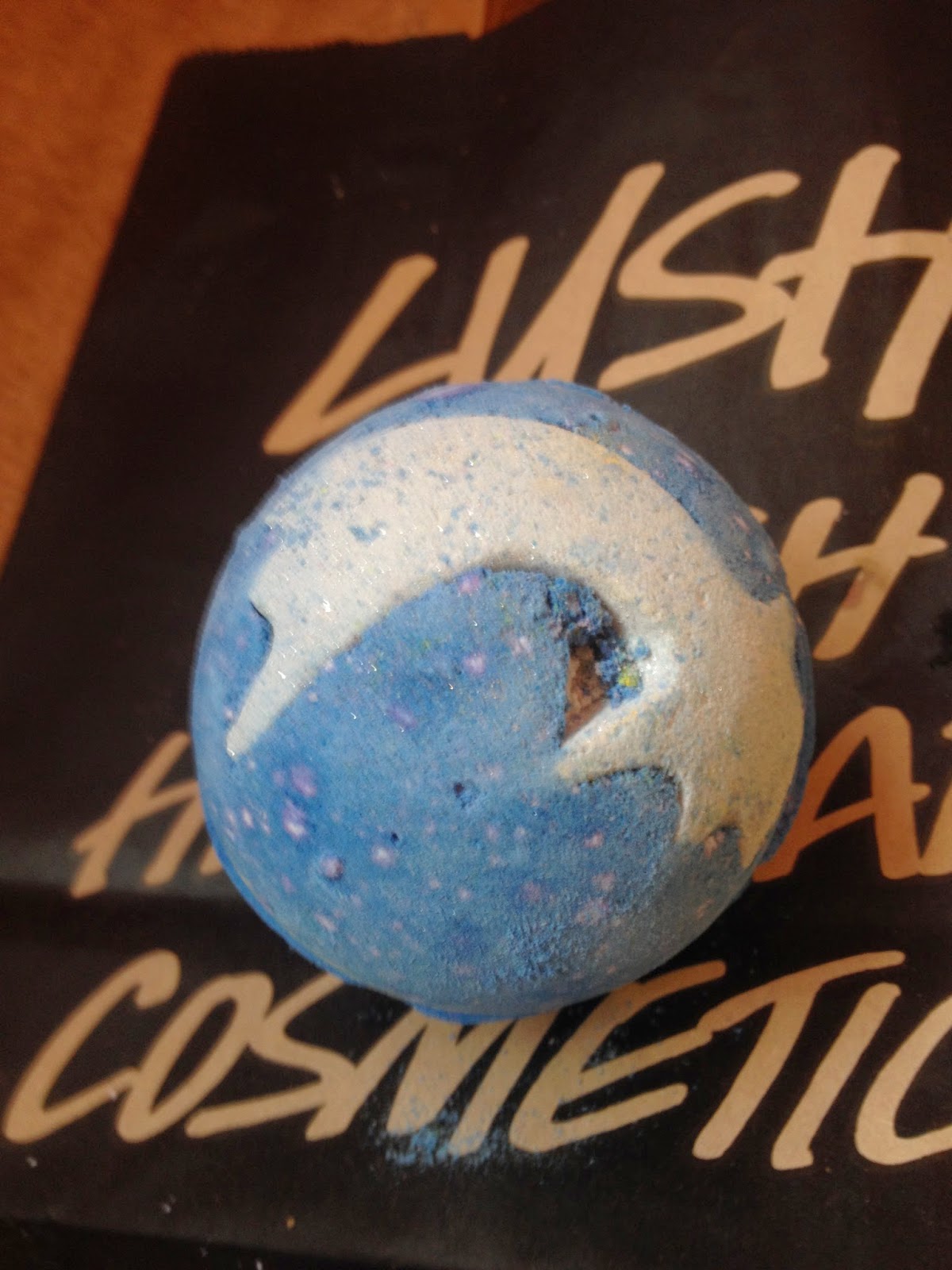 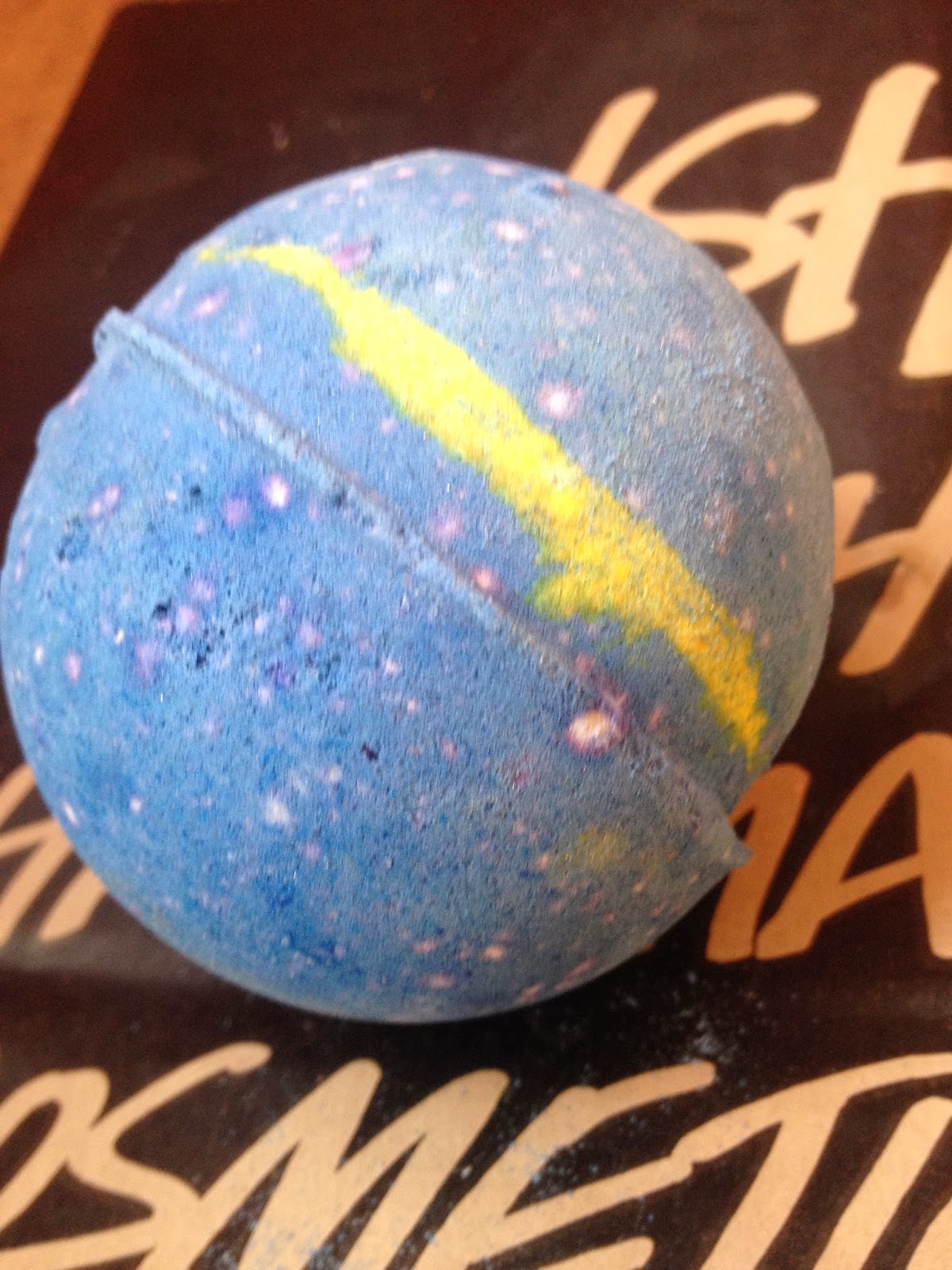 'Shoot for the stars' Bath bomb- £3.50
I have heard about this bath bomb a few times online, and when I saw it in store I was intrigued and felt the need to buy it! It looks so pretty and apparently it is like a "galaxy in your bath!" It smells so good! I can't really describe it but it is quite a sweet smell with possibly a hint of honey?! Either way it is beautiful and has an amazing smell! 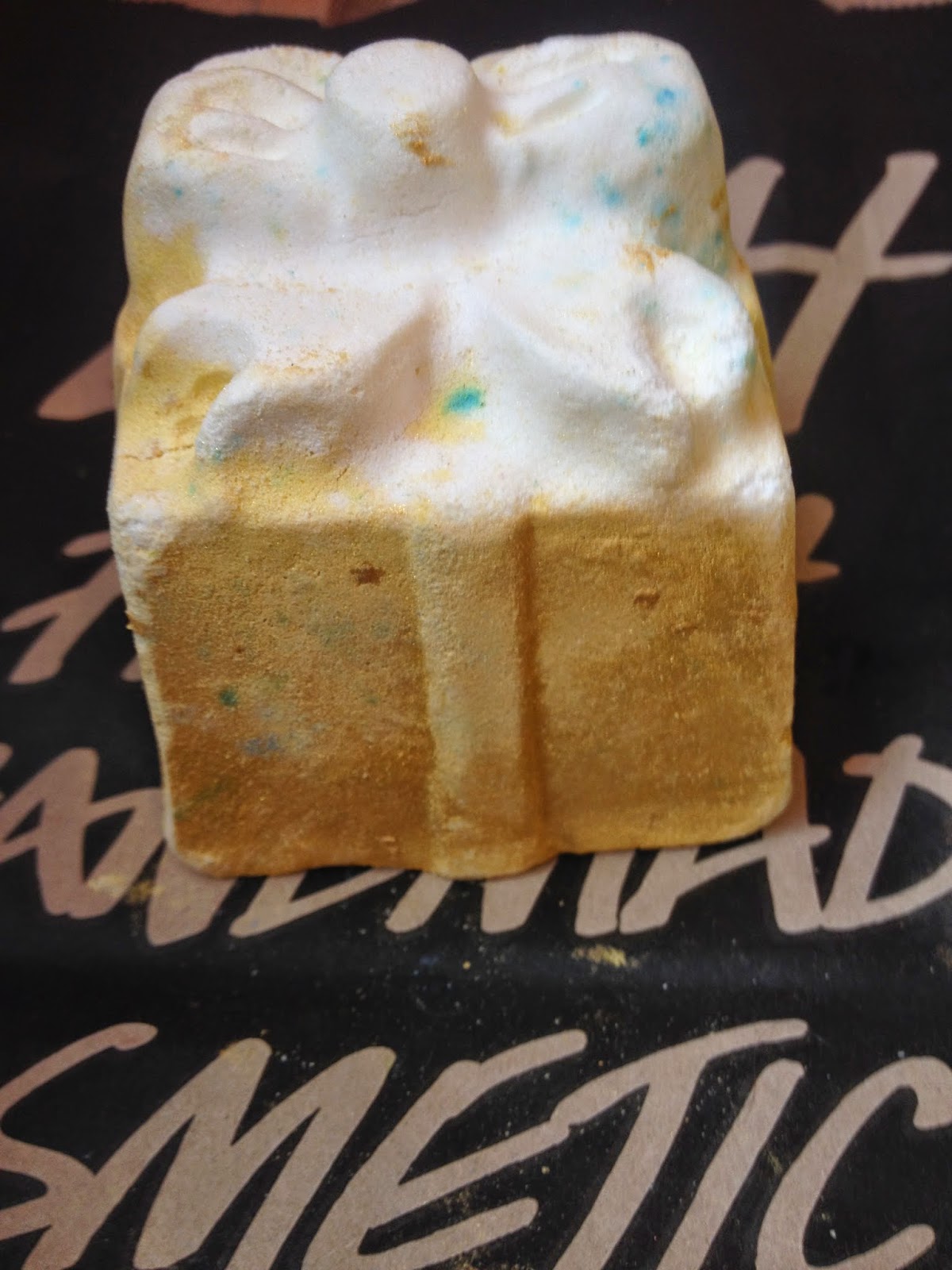 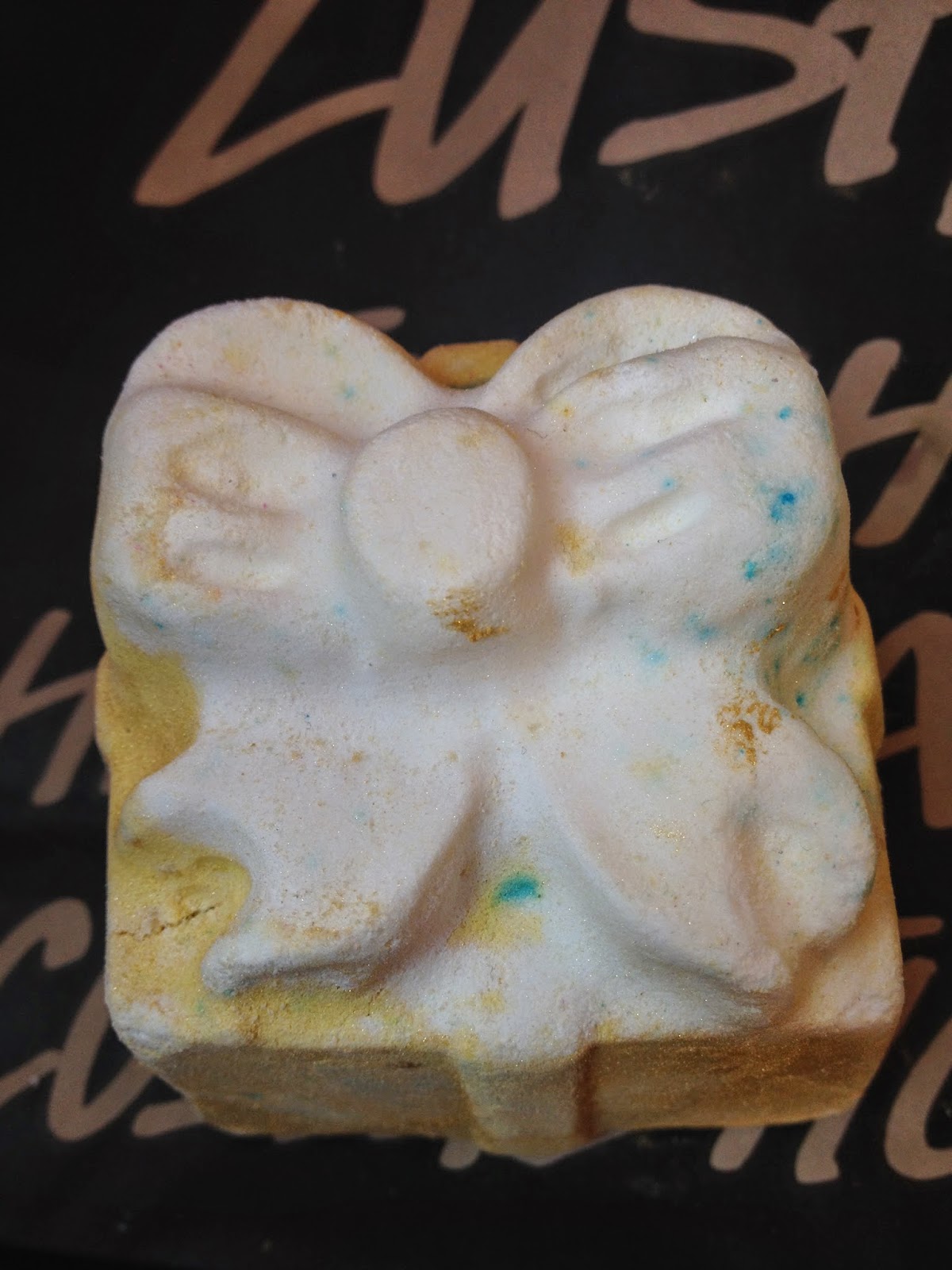 'Golden Wonder' Bath bomb- £3.75
I think it safe to say that I LOVE Christmas! Just everything about it makes me happy (except the cold weather)!!! The music, films, spending time with family and friends, the shopping! This bath bomb just smells like you would expect a bath bomb to smell like! It doesn't smell particularly like Christmas as such, but I think it is safe to say that the lack of Christmas smells are made up for in the design! It stood out from all of the other bath bombs in the shop because it just looks stunning!
I am very excited to use this one, but also a bit nervous because my hands got covered in glitter just from taking it out the packaging to take photos of it! 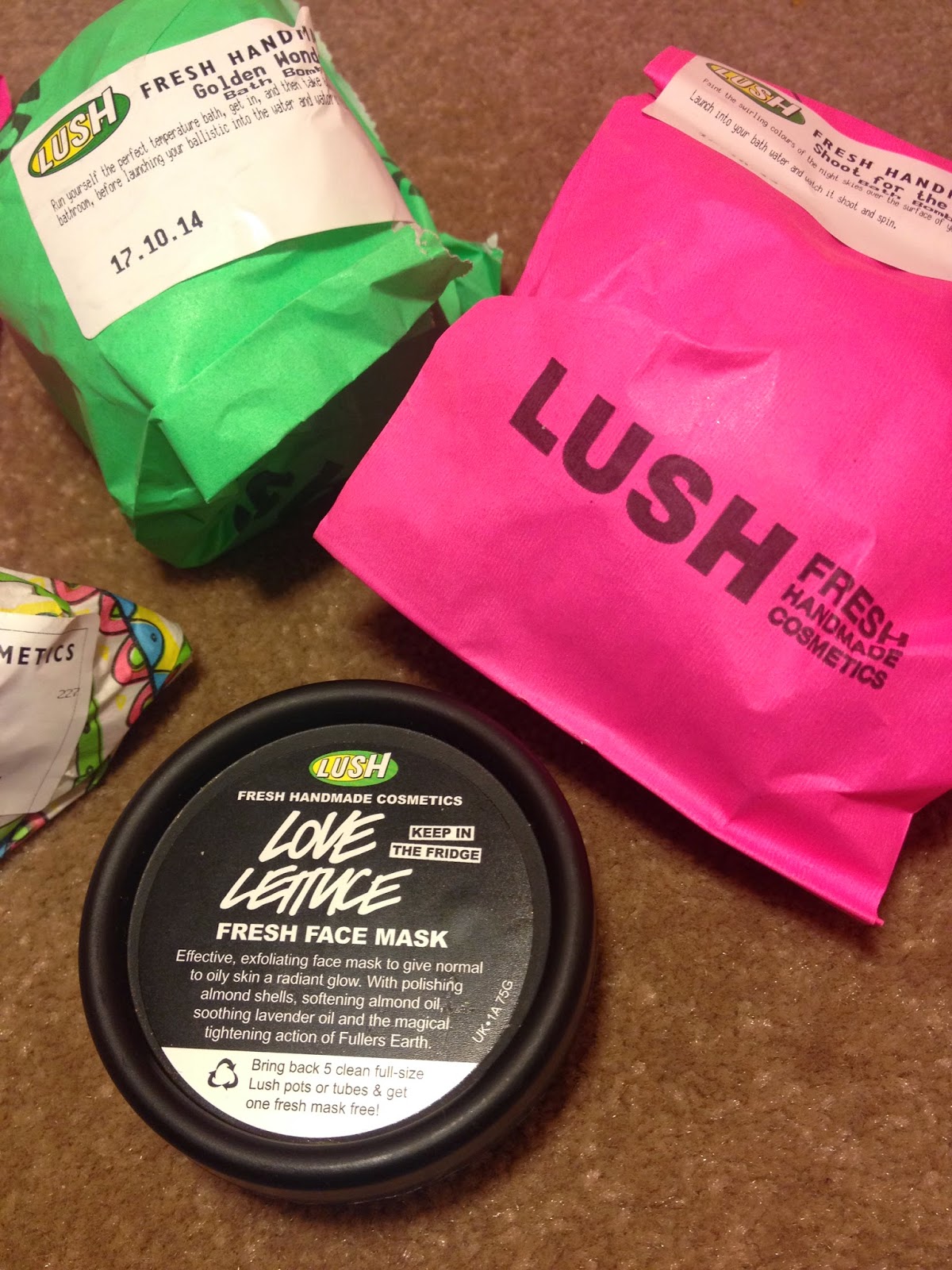 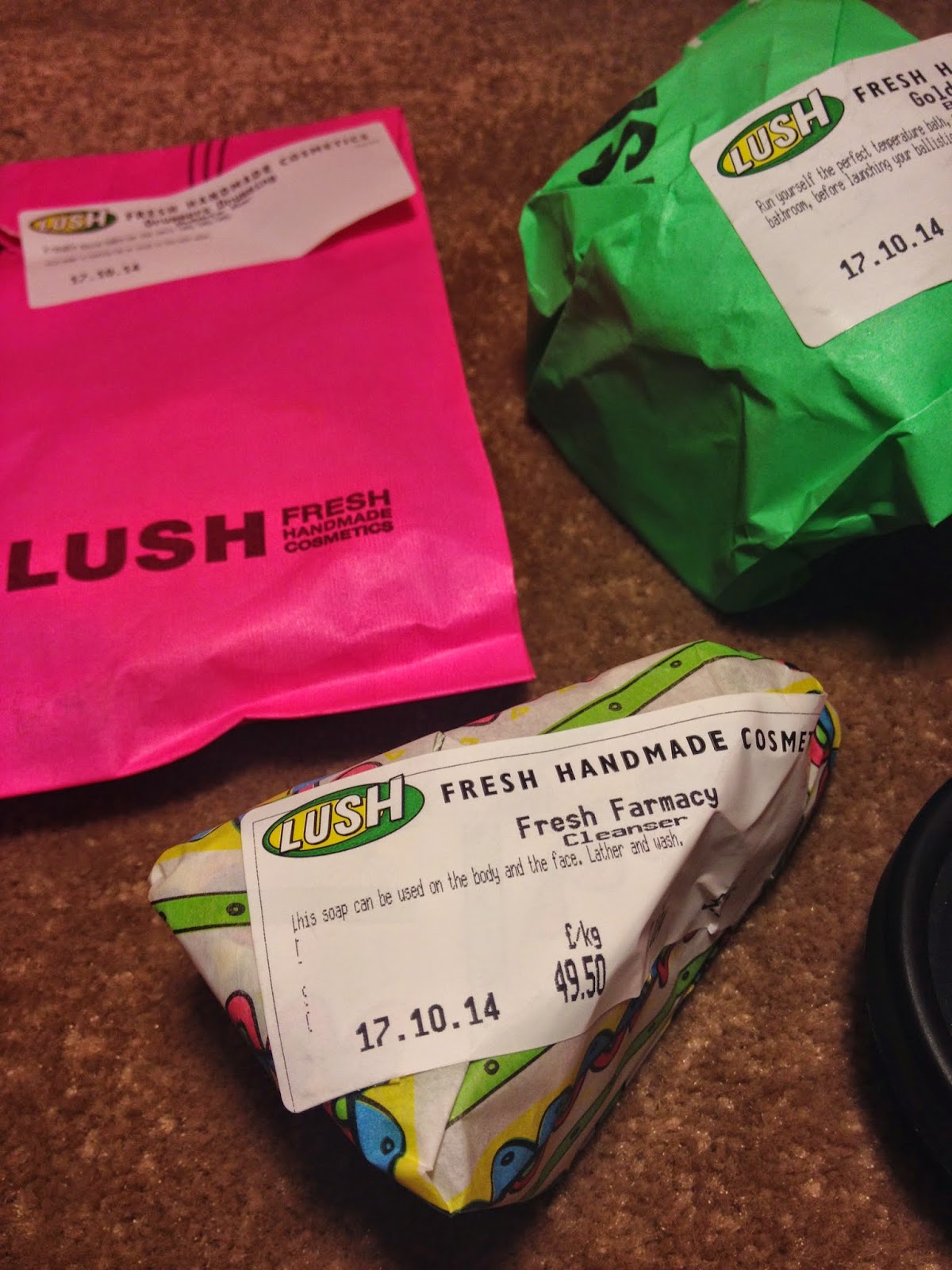 I know some people will be thinking that I didn't spend that much money, because I have seen some people's hauls where they have practically brought everything in the shop! I don't want to even think about how much money some people spent in their hauls! I would love to be able to spend as much money as I felt like in Lush (and I could easily spend too much) but the £24 this costs me, which was probably more than I should have, judging by how much money I have left!There were so many things in there that I wanted sooo badly, but I simply hadn't got the money. I literally had to put some bath bombs back because I couldn't afford them all!:(
Thanks for reading! I really love it when people leave comments and feel free to follow me on bloglovin!
Oh and what do you think to the new packaging? It's very, ummm, bright shall we say?!!
xxxx
Posted by Unknown at 04:20

How did you get to this blog?